With myriad government policy suggestions and implementations swirling around in the news, I decided to read Robert Reich’s Economics in Wonderland: A Cartoon Guide to a Political World Gone Mad and Mean in order to try to understand the implications of current governmental rhetoric and decisions. Reich is a well-respected economist who teaches at the University of California at Berkeley. His latest work attempts to simplify complicated concepts in order to help non-economists understand economic trends and the workings of the U.S. government.

After his son, a filmmaker, faulted him for writing only traditional books, which he believes are ineffective at reaching a younger generation, Reich started experimenting with other formats to impart his knowledge to a larger audience. He began taking part in documentaries that helped map the current economic terrain, highlighting the widening wealth gap. In addition, he produced short video clips deciphering things like the Affordable Care Act, gerrymandering, and the student debt crisis. If you’d like to see an example of one of these, search YouTube for Robert Reich’s “The Big Picture: How We Got Into This Mess, And How Get Out of It.”

Economics in Wonderland is a hybrid work that combines short explanatory segments on different issues like wealth inequality, free trade, and student debt, accompanied by cartoons visually amplifying the same subjects. I found the narrative parts more useful, but I am not a visual person when it comes to my learning style. Readers interested in any of Reich’s topics will need to look to Reich’s longer works in order to obtain more detailed information and analysis.

The book is divided into four sections: Big Money; Shams, Scams, and Flim-Flams; Solutions; and Trumponomics. Throughout the book, Reich emphasizes the role that extreme wealth plays in shaping everything from our tax policies and foreign trade to our elections. Reich elaborates on how this country’s wealth is controlled by a very small minority (of largely white males), despite America’s ethnic and gender diversity. He maintains that this wealthy minority has very little reason to care about social woes since they are mostly unaffected by issues like the health of our public school system, climate change, and the solvency of Social Security. Their wealth insulates them from the anxiety-producing realities of such things.

The section on Trumponomics outlines the alarming trends of the current administration, addressing some of the follies of the Trump presidency. These include pushing for more coal production in an age of climate change, deregulating the banking industry again (even after the 2008 financial debacle), and attempting to suppress the free press among other things.

Reich consistently approaches problems from a humane and socially conscious perspective. He believes that policies that provide benefits for only a few and that worsen inequality are reprehensible. He has made it his life’s work to uncover truths about government policies and actions in a way that lay people can understand.

Reich is definitely liberal-leaning, so his ideas may be at odds with more conservative thinkers. Nonetheless, given the chaos of the executive branch these days, Reich’s book comes at an important time for citizen activists to gain more knowledge of government. Only by educating ourselves can we make informed voting decisions and, if necessary, put politicians’ feet to the fire when we think their policies are destructive to the long-term well-being of our country.

Join local author Finn Murphy for a reception at the library on Thursday, February 22nd at 7:00 PM. Murphy will discuss his experiences that led up to his critically acclaimed first book, The Long Haul: A Trucker’s Tales of Life on the Road (W. H. Norton, 2017). Light refreshments will be served and participants have a chance to win a signed copy of the book.

The Pleasures of Discovery

DISCOVERING AND RE-DISCOVERING Since books are my passion and profession, I love to shelve and alphabetize them, and that gives me the opportunity to discover (and re-discover) books for my own enjoyment and to recommend to patrons ...by Cathy Grace

Read in Ned: Open Call for Artists at the Library 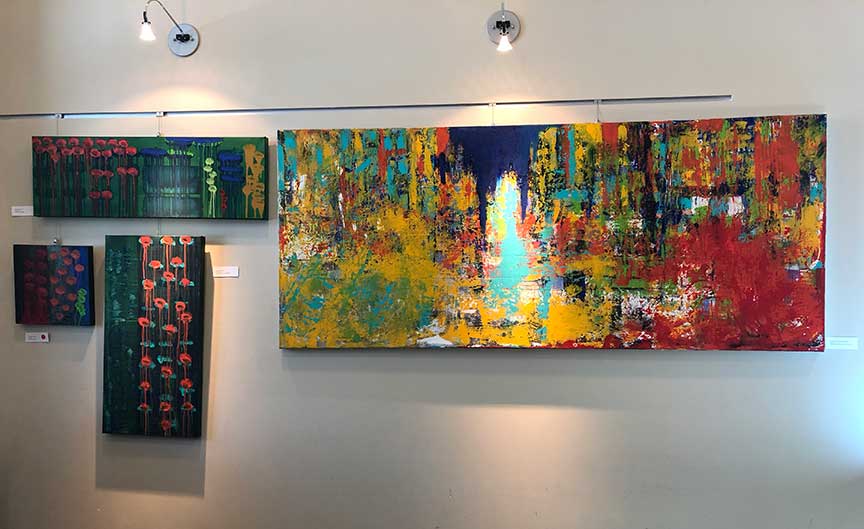 OPEN CALL FOR ARTISTS Our second and final Open Call for Artists for 2019 ...by Marni Siegal

George and Lizzie and Libby and Cathy

GEORGE AND LIZZIE and LIBBY AND CATHY I discovered a zippy new app called Libby, which makes it extremely easy to search for and browse ebooks and audiobooks in Nederland’s Overdrive inventory as well as to access other libraries’ Overdrive inventories. ...by Cathy Grace
Search Our Site
Support Your Library